We Take On The World
So You Don't Have To.

WASHINGTON, DC – Two new lawsuits filed in the U.S. District Court for the District of Columbia reveal that the FBI retaliated against two female employees who were sexually harassed and assaulted by male supervisors. After they reported the abuse to the FBI, the women faced further harassment and were ultimately forced to leave the FBI, while the perpetrators faced no consequences and were able to retire with full benefits.

“For too long, the FBI has perpetuated a toxic culture where sexual harassment and abuse are not only tolerated, but perpetrators are protected, and survivors are persecuted. This pattern of behavior is disgraceful in any workplace, but particularly so at the nation’s top law enforcement agency,” said attorney for the plaintiffs David Shaffer. “In coming forward, these two brave women are holding the FBI accountable and hope to bring about urgently-needed change within the bureau.”

One complaint details the experience of a female analyst at the Training Academy at Quantico who is a military veteran and was sexually assaulted by an FBI supervisor at an off-site holiday party in 2017. She was then retaliated against for reporting the assault to her FBI superiors and filing a criminal complaint, and was continually harassed and forced to work in a hostile environment – including alongside those who tried to protect her assailant. She ultimately was forced to leave the FBI after six years of service. Meanwhile, her attacker was able to quietly retire with benefits, facing no repercussions for the sexual assault he committed.

The other complaint outlines a chilling pattern of emotional, physical, and sexual abuse that a female employee suffered at the hands of her manager, the Special Agent in Charge of the field office where she worked, for nearly a decade, beginning in 2011. Over the course of two years, he subjected her to non-consensual sexual encounters, control, assault, imprisonment, stalking, and harassment that continued in-person until he moved to another state, after which he continued to track, stalk, call, and email incessantly. The Office of Inspector General, instead of taking action against her tormentor, terminated her for allegedly untruthful statements that she made under threats of harm against her and her family.

These suits, filed by civil rights attorneys David Shaffer and Kelley Brooks Simoneaux, come a little over a year after Shaffer filed a class action lawsuit for sixteen women who trained to become FBI agents and analysts accusing the bureau of gender discrimination in how it trains and evaluates female candidates for Special Agent positions. The women are supported by the TIME’S UP Legal Defense Fund, which provides legal and public relations assistance to survivors.

For the first complaint, see here.

At David Shaffer Law, we are pursuing a class action against ICE for their lack of gender-normed physical tests and discriminating against our client and other female trainees on the basis of sex. While at the Federal Law Enforcement Training Center (FLETC), our client was not only faced with male-tailored physical tests, but also with the male-tailored instructors who singled her out multiple times for minor issues which were overlooked when the male trainees had similar issues. We filed her official, individual and class complaint through the Department of Homeland Security in early January 2021.

As women make up more than half of the U.S. population and account for 47% of all working Americans, they comprise just 13% of law enforcement officers and 15.5% of all sworn federal law enforcement officers (Reaves, 2012). Women in law enforcement have always been underrepresented for various reasons: masculine stigma, recruitment issues, hostile work environment, etc., but one measure that has been repeatedly seen to have a disparate impact on women are the physical examinations.

Within ICE, 71.9% are men and 28.1% are women (Alvarado, 2017). Immigration and Customs Enforcement (ICE), unlike other federal law enforcement agencies like the DEA and the FBI, does not use gender-normed physical examinations. Gender-normed tests set different raw cutoffs for male and female applicants such that each class would be expected to have roughly equal pass rates, making it more equitable for women.

We are hoping to retain more female ICE agents with similar gender discrimination issues to expand our case. Therefore, if you, or anyone you know, have been retaliated against from the Immigration and Customs Enforcement agency, please reach out to us as soon as possible.

Federal law enforcement agencies must create an organizational culture that does not tolerate harassment and discrimination and implement policies that highlight women’s contribution in this male-dominated field. While it’ll take a lot more work to change the masculine identity of law enforcement, we believe that the one step in the direction of full gender equity is the inclusion of gender-normed physical tests. 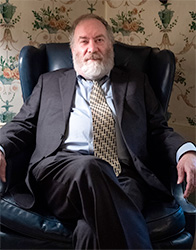 My name is David Shaffer. I specialize in civil rights cases for women, minorities and individuals with disabilities, and have represented hundreds of women and minorities in nation-wide class actions against federal law enforcement agencies, such as the FBI, ATF and Secret Service. I also represent individuals with disabilities in seeking accommodations in the workplace and represent them in employment litigation.

I have worked extensively in class action litigation, including representing minority law and female enforcement agents in class action discrimination cases against the Federal Bureau of Investigation, U.S. Customs Service, U.S. Secret Service, and the Bureau of Alcohol, Tobacco & Firearms. I was also the lead attorney in the defense of several major class actions involving public accommodations and employment, the most notable of which have been the Adams Mark Hotel class actions and the Holiday Spas class actions.

In my work with insurance companies, I review and monitor the defense of employment class actions under employment practices liability insurance (EPLI). This helps the insurer determine their liability should a class action develop and the prospects for settlement. This also helps the insurer determine the level of underwriting risk in issuing a policy of EPLI insurance in line with the company's personnel practices.

I've done extensive underwriting (over 300 accounts) to determine the likelihood of exposure and to assist the insurer in determining proper reserves; I've also written a book for AEGIS Loss Control entitled Employment Practice Self-Assessment Guide. This book is used by major insurance companies to determine their internal potential liabilities, and to correct practices that may have a disparate impact upon females or minorities.

I was lead counsel in defending the Washington Metropolitan Area Transit Authority in a class action under the ADA and Rehabilitation Act. I have also represented the Authority in a pattern and practice suit brought by the U.S. Department of Justice challenging religious accommodation.

Additionally, I also litigate extensively in the labor and employment law area; on the plaintiff side largely against the federal government, and on the defense side on behalf of corporate interests. I have litigated dozens of employment lawsuits, and have appeared on The Today Show, Good Morning America, Court TV, and CBS, ABC and NBC Evening News. I'm also active in teaching CLE courses on affirmative action, and civil rights law. I advise clients in virtually every area of employment and labor law.

Contact me today to set
up a free consultation.